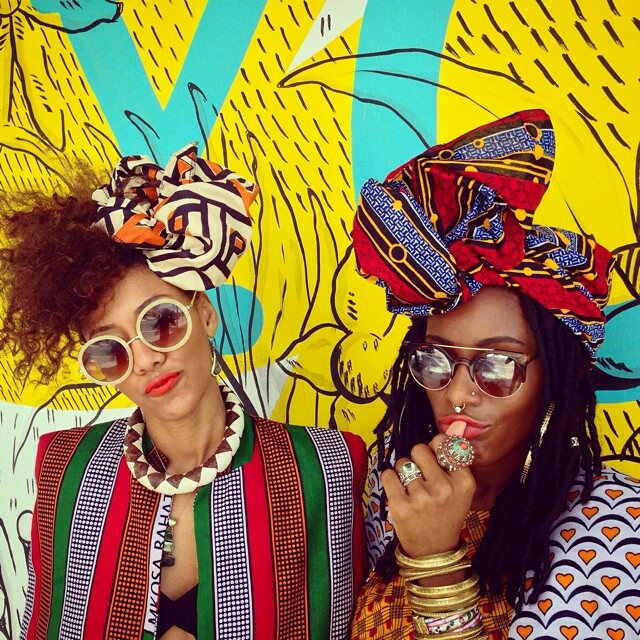 14 May “An Afropolitan Renaissance.”

After years of fighting negative stereotypes about Africa, especially through Western news cycles, a generation of passionate Afrocentrists are finally doing something about it. A new wave of actors and allies are taking on the responsibility of representing African cultures, values, identity and heritage, and are subsequently working to play a role in determining the fate of the continent.

Michelle Obama just hosted African dance classes at the White House! Kendrick Lamar opened his set after raking in 5 awards at the Grammys, saying, “I’m African-American, I’m African! …” The set-design for “Allright” consisted of a fireside setting in an african village! As if this blatant display of Afrocentricity wasn’t enough, Kdot completed his set with the African map on the backdrop, Compton at the center, unapologetically representing both his African and American heritage.

Lupita Nyong’o has graced the cover of Vogue and other leading magazines in the US and around the world so many times lately, I’ve lost count. John Boyega, the son of a Nigerian immigrant by way of England played a leading role in Star Wars! Yes, you heard that right.

Meanwhile, Beyonce has not only openly engaged African choreographers in her recent videos, she also used a speech by Chimamanda Adichie on her track “Flawless,” literally lifting the quote without an attempt at disguising, adjusting or changing Chimamanda’s voice or accent!

Idris Elba, a first-generation Brit of Ghanaian and Sierra-Leonian heritage is a darling of film goers everywhere, and recently called on his government to address issues like Ebola and the lack of diversity in the UK film industry. It’s only a matter of time before he plays Bond. Meanwhile, FELA! a story on the life of Nigerian activist and Afrobeat legend enjoyed a lengthy spell on Broadway.

Ghanaian rapper, Sarkodie and Hip-Life producer ODG took the Azonto phenomenon global. Davido, another Nigerian sensation just graced the cover of FADER’s global magazine! Danai Gurrira, a first generation American born to Zimbabwean parents has the first “all Black, all women” production, Eclipsed, on Broadway, telling the story of 5 women from the Liberian civil war era. The list goes on and on …

But this open embrace of African culture hasn’t magically arisen in the last couple of months. It’s a momentum that has been building for a minute. How did we get here? How did we arrive at this point of unapologetic Africanness? We finally appear to have traveled a great distance from the era when all you saw about Africans in the media were images of malnourished kids with protruding bellies, buzzing house flies roaming their dirty faces. Trevor Noah does a great take on this particular misrepresentation of Africans in one of his most popular jokes, The UNICEF Fly.

While there is still a lot of work to be done to encourage opportunities like dual citizenship and practical land-ownership laws for returnees, more Africans in the diaspora are finally embracing the idea of being identified as Africans, visiting the continent more and even moving back to settle. Why?

I see vividly the length we have come from stale stereotypes to this new renaissance. As a young, eager Ghanaian student at Columbia University, I used to be confused when I would invite other Africans to African student meetings, only to hear, “My mum and dad are from, but I am American…” I would chuckle and encourage them to go ahead and enjoy their game of fencing or beer pong or whatever western activity they found more desirable than a good hang with other African students offering free Jollof Rice and fried ripe plantains.

At the time (and this wasn’t that long ago), there simply weren’t enough reasons for anyone to express a sense of pride in an African identity, considering how Africa used to be portrayed in the media. And while much of that negative portrayal hasn’t changed, several social movements have risen to showcase sides of Africa previously unknown — or perhaps known by some, but less dramatic and less profitable for news cycles. Enhancing and portraying a positive worldview of African fashion, food, and culture on social media has penetrated the psyche of a whole generation of “gottabes.” (Wannabes wanna be, Gottabes gotta be).

During these brief posts titled, “Two troubles one God,” I will be examining critical aspects of the ongoing conversation between Africans, Africans in the diaspora, including African-Americans, Caribbeans, and white people who identify around a shared African identity. “Two troubles,” because of the constant push and pull between an African identity and other identities one might have inherited, in addition to being African, “one God,” referring to a supreme mother Africa, the common thread running through these discourses. 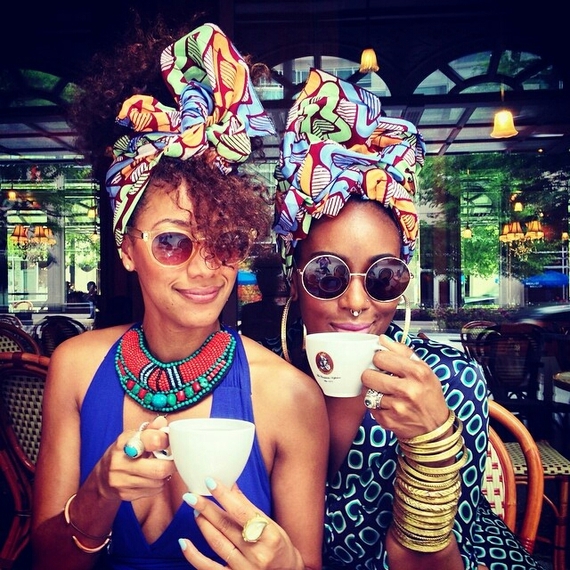 Photo courtesy of The Bazaar Bohemian

But before it was cool to be African, Kofi Annan’s role as Secretary-General of the UN was crucial for young Africans in and outside the continent, who had been deprived of positive global leaders they could emulate. His appointment helped young Africans around the globe to embrace their African identity and show up. I remember applying to colleges thinking, “The next generation of leaders are all applying to college now.” It was the leadership of people like Kofi Annan that gave me the courage to apply to come halfway across the world to study at an elite university, though I did not come from an elite family.

Bono could claim the “One campaign” changed the world’s view of my continent. Jeffrey Sachs could claim it was the launch of the UN’s Millennium Development goals that brought African countries urgently to the forefront of development-focused initiatives.

Mahmood Mahmdani could argue that his fight against propaganda around Darfur encouraged Africans to speak out, and even claim the narrative of their nation states. Others would argue, however, that most folks weren’t privy to the eloquent debates taking place in lofty chambers under Ivy league towers and that it was artists like Fela Kuti, Miriam Makeba, and co. that did the job!

I hear Grammy award winners, Angelique Kidjo and Youssou Ndour showcasing their work, chipping off ignorance and hate, and enforcing a sense of pride about the continent one song, award, and gig at a time, in the US and around the globe. Akon would claim, half a decade of hits, an unapologetic depth of melanin, and an African consciousness, not necessarily in sound but by representation, did the job.

K’naan will point at the dates from the release of “Soobax“ to the performance of “Waving Flag” at the 2010 World Cup to reminding us of how his events became a “coming out” of sorts for young East Africans and Africans in the West. He might say his audience used his growth and rise to fame as a launchpad to freely embrace and showcase their identities.

Arise Magazine might want to have a say as one of the premier media outlets that brought positive images of growing middle-class economies on the continent into the limelight.

A whole generation of African models in the last decade or two, such as Alek Wek, Liya Kebede, Nykhor Paul, Maria Borges, could say they have broken ground. Somali twins, Ayaan and Idil of the Maatano brand, as well as Ghanaian born, Mimi Plange have made huge strides in the fashion industry.

Two American Presidents certainly might point to their much more profound contribution. Bill Clinton would state that, as the first sitting president of the US to visit Africa during his presidency, he brought a huge wave of exposure, enthusiasm, investors, pride, confidence and opportunity to the continent. While he might have missed steps in his African agenda, he did more to ensure that its voice was taken seriously around the world than any prior US president.

President Obama might insist that he brought a lot more to the table as an African-American US president with undeniable Kenyan roots which, in his proud expression of them, resonated everywhere, ringing the bell of hope and possibility louder and clearer than any policy position could have.

Chimamanda Ngozi Adichie, author of Purple Hibiscus and Americanah, could stress that, as recent as the release of her work might have been, her books did a lot to encourage the “coming out” of young women of color who finally felt they had found both a feminist and African voice that echoed their sentiments, encouraged their afrocentricity, and expounded on their thoughts and reflections in a way very few writers have done before. She would argue that she encouraged them to be bold, defiant feminists who could weave a sense of an African identity that can be embraced by both the African-American and the African at home.

Taiye Selasie, author of Ghana Must Go would say, “O, go back to ‘05, I explained in my essay Bye Bye Barbar:

One answer is: adolescence. The Africans that left Africa between 1960 and 1975 had children, and most overseas. Some of us were bred on African shores then shipped to the West for higher education; others born in much colder climates and sent home for cultural re-indoctrination. Either way, we spent the 80’s chasing after accolades, eating fufu at family parties, and listening to adults argue politics. By the turn of the century (the recent one), we were matching our parents in number of degrees, and/or achieving things our ‘people’ in the grand sense only dreamed of. This new demographic - dispersed across Brixton, Bethesda, Boston, Berlin - has come of age in the 21st century, redefining what it means to be African.

There is a whole generation of Afropolitans, Afrofuturists, Afropunks, Afrocentrists, Pan-Africanists, employing a list of descriptors which have served as unifiers in creating communities and social movements, that have accelerated exponentially with the advent of Facebook, Twitter, Instagram and other social media.

No one can say exactly when this Afropolitan Renaissance was born. What we can agree on is that a critical mass of events have made it a lot easier and more practical for folks who want to identify with their African heritage to jump in. As they often say at the Black, Caribbean and African student gatherings these days: “The student meetings are lit, and the community is woke!”

Help spread the word. You're awesome for doing it!